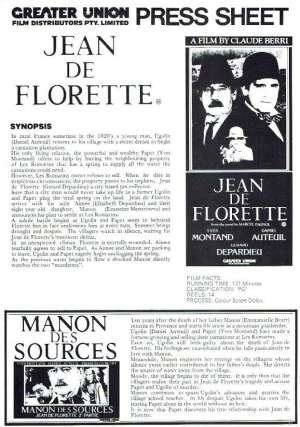 Original Movie Press Sheet.Jean de Florette is a 1986 French period drama film directed by Claude Berri, based on a novel by Marcel Pagnol. The film starred three of France's most prominent actors – Gérard Depardieu, Daniel Auteuil, who won a BAFTA award for his performance, and Yves Montand in one of the last roles before his death.The film was shot, together with Manon des Sources, over a period of seven months – the sequel. At the time the most expensive French film ever made, it was a great commercial and critical success, both domestically and internationally, and was nominated for eight César awards, and ten BAFTAs.