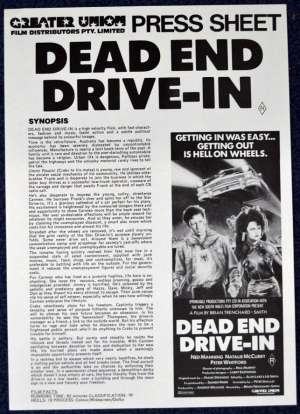 Original Movie Press Sheet Country Of Origin.Dead End Drive-In is a 1986 Ozploitation film about a teenage couple trapped in a drive-in theatre which is really a concentration camp for societal rejects. The inmates, many of whom sport punk fashion, are fed a steady diet of junk food, new wave music, drugs, and bad movies. The film was directed by Brian Trenchard-Smith. It stars Ned Manning and Natalie McCurry as the captive couple, and Peter Whitford as the manager of the drive-in. Mad Max 2 stuntman Guy Norris did some of the stunts. The soundtrack includes contemporary popular music performed by such bands as Kids in the Kitchen and Hunters and Collectors. The song during the rolling credits is "Playing With Fire" by Lisa Edwards.