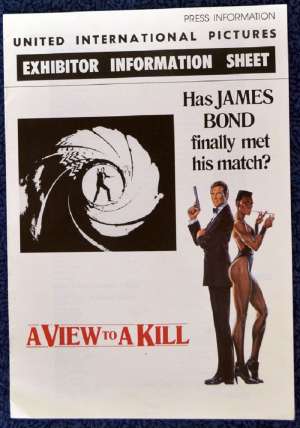 Original rare Exhibitor Information Booklet A View To A Kill

A View To A Kill Booklet - 12 pages.The booklet details complete information about the main cast, production notes, locations, previous Bond films, Villians, girls and notes on Fleming. There is significant detail on the  marketing material available for this film.  A View to a Kill is a 1985 American-British spy film, the fourteenth in the James Bond series produced by Eon Productions, and the seventh and last to star Roger Moore as the fictional MI6 agent James Bond. Although the title is adapted from Ian Fleming's short story "From a View to a Kill", the film has an entirely original screenplay. In A View to a Kill, Bond is pitted against Max Zorin, who plans to destroy California's Silicon Valley. Early publicity for the film in 1984 included an announcement that David Bowie would play Zorin. He later turned the role down and it was offered to Sting and finally to Christopher Walken. The film was produced by Albert R. Broccoli and Michael G. Wilson, who also wrote the screenplay with Richard Maibaum. It was the third James Bond film to be directed by John Glen, and the last to feature Lois Maxwell as Miss Moneypenny. The film was a commercial success with the Duran Duran theme song "A View To A Kill" performing well in the charts, becoming the only theme song to reach #1 on the Billboard Hot 100 and earning a Golden Globe nomination for Best Song. Interesting casting notes include:Maud Adams made an un-credited cameo appearance as an extra in one of the Fisherman's Wharf scenes, making it her third Bond film appearance. Dolph Lundgren has a brief appearance as one of General Gogol's KGB agents.