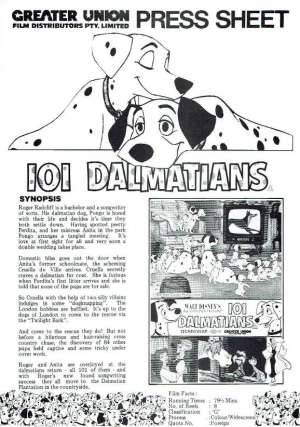 Original Movie Press sheet.One Hundred and One Dalmatians, often written 101 Dalmatians, is a 1961 American animated adventure film produced by Walt Disney Productions and adapted from Dodie Smith's 1956 novel of the same name. It stars Rod Taylor and Cate Bauer as, respectively, the voices of Pongo and Perdita, its canine protagonists, and Betty Lou Gerson as the voice of Cruella de Vil, its antagonist who kidnaps their puppies. The film was originally released to theaters on January 25, 1961, by Buena Vista Distribution. Upon release, it was a box office hit, successfully pulling the studio out of the financial setbacks caused by Sleeping Beauty, a costlier production released two years.