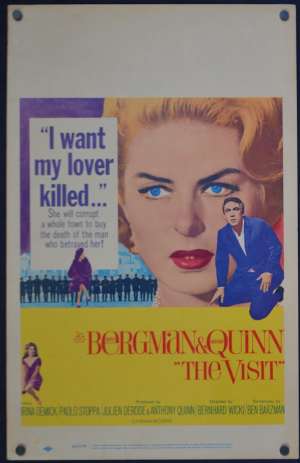 The Visit is a 1964 international co-production film from France, Italy, Germany, and the United States, distributed by 20th Century Fox. It was directed by Bernhard Wicki and produced by Darryl F. Zanuck and Julien Derode, with the film's stars, Ingrid Bergman and Anthony Quinn, as co-producers. The screenplay was by Ben Barzman, adapted by Maurice Valency from Friedrich Dürrenmatt's 1956 play Der Besuch der alten Dame (literally, The Visit of the Old Lady).Bergman and Quinn head a cast that includes Irina Demick, Paolo Stoppa, Hans Christian Blech, Romolo Valli, Valentina Cortese, Claude Dauphin, and Eduardo Ciannelli. The film was a study of the darker elements of human nature. The themes of the film, as with the play, are greed, revenge and corruption and the fact that money can buy anything, even justice. Power that comes from money can lead to hate, even murder and to the collapse of ordinary morality. Bernhard Wicki was nominated for the Golden Palm at the 1964 Cannes Film Festival and the film received a nomination for Best Costume Design-Black and White (René Hubert) at the Academy Awards.