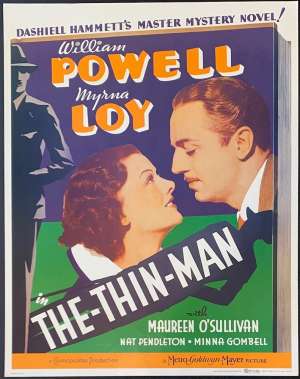 USA Commercial Print Poster.The Thin Man is a 1934 American pre-Code comedy-mystery directed by W. S. Van Dyke and based on the 1934 novel of the same name by Dashiell Hammett. The film stars William Powell and Myrna Loy as Nick and Nora Charles, a leisure-class couple who enjoy copious drinking and flirtatious banter. Nick is a retired private detective who left his very successful career when he married Nora, a wealthy heiress accustomed to high society. Their wire-haired fox terrier Asta was played by canine actor Skippy. The film was released on May 25, 1934 to extremely positive reviews and was a box office hit, with special praise for the chemistry between Loy and Powell. In 1934, the film was nominated for the Academy Award for Best Picture. The film was such a success that it spawned five sequels.