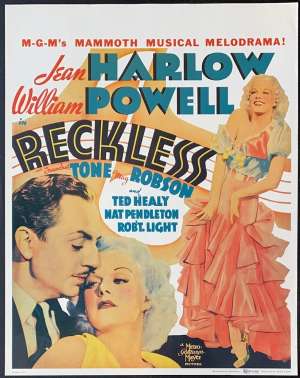 USA Printed Commercial Poster with striking artwork.Reckless (also known as Born Reckless and Hard to Handle) is a 1935 American musical film directed by Victor Fleming and starring Jean Harlow, William Powell, Franchot Tone, May Robson, Rosalind Russell and Mickey Rooney. David O. Selznick wrote the story, using the pseudonym Oliver Jeffries, basing it loosely on the scandal of the 1931 marriage between torch singer Libby Holman and tobacco heir Zachary Smith Reynolds, and his death by a gunshot wound to the head. Joan Crawford was cast as the lead. However, one week before production Harlow replaced Crawford, as David O. Selznick had decided that Powell's real-life romance with Harlow would help to publicize the film. Harlow was reluctant to be in the film as her husband Paul Bern (like the husband of her character Mona Leslie) had committed suicide two years earlier.