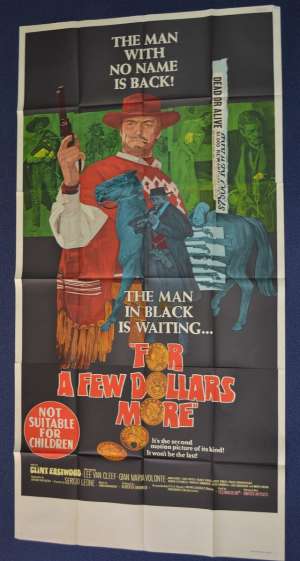 For A Few Dollars More (Italian: Per qualche dollaro in più) is a 1965 Italian spaghetti western film directed by Sergio Leone and starring Clint Eastwood, Lee Van Cleef, and Gian Maria Volontè. German actor Klaus Kinski also plays a supporting role as a secondary villain. Although released in Italy in 1965 under the above Italian title, the film was not released in the United States until 1967 and is the second part of what is commonly known as the Dollars Trilogy, following A Fistful of Dollars and preceding The Good, the Bad and the Ugly. Rarely do original Three Sheet movie posters become available for this early Eastwood iconic film.