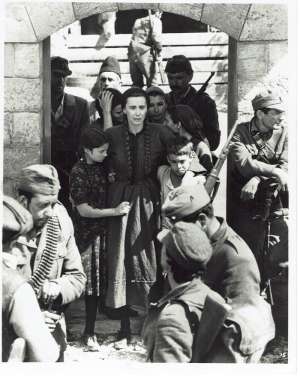 Original Studio 8x10 Still. Eleni is the 1985 film adaptation of the memoir Eleni by Greek-American journalist Nicholas Gage. Directed by Peter Yates with a screenplay by Steve Tesich, the film stars John Malkovich, Kate Nelligan, Linda Hunt and Glenne Headly. The film is told in a flashback format with Gage, now living in the United States, returning to his native Greece to solve the mystery of his mother's death when he was a child. The film looks back to the effect of the 1940s Greek Civil War on the remote Greek village of his upbringing.