The Elephant Man Lobby Card No 5 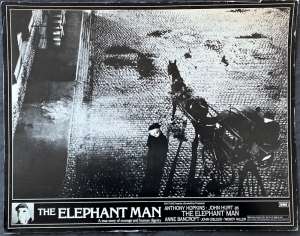 Lobby Card-The Elephant Man. The Elephant Man is a 1980 British-American historical drama film about Joseph Merrick (whom the script calls John Merrick), a severely deformed man in late 19th century London. The film was directed by David Lynch and stars John Hurt, Anthony Hopkins, Anne Bancroft and John Gielgud. It was produced by Jonathan Sanger and Mel Brooks, the latter of whom was intentionally left uncredited to avoid confusion from audiences who possibly would have expected a comedy. It was shot in black-and-white and featured make-up work by Christopher Tucker. The makeup was directly designed from casts of Merrick's body, which had been kept in the Royal London Hospital’s private museum. The makeup took seven to eight hours to apply each day and two hours to delicately remove. John Hurt would arrive on set at 5am and shoot his scenes from noon until 10pm. Because of the strain on the actor, he worked alternate days. The Elephant Man was a critical and commercial success with eight Academy Award nominations, including Best Picture, Best Director, and Best Actor.