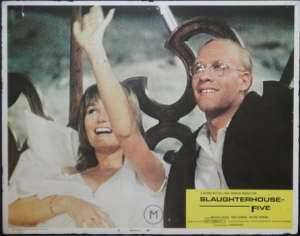 Lobby Card.Slaughterhouse-Five is a 1972 American comedy-drama military science fiction film directed by George Roy Hill and produced by Paul Monash, from a by Stephen Geller, based on the 1969 novel of the same name by Kurt Vonnegut. The film stars Michael Sacks as Billy Pilgrim, who is unstuck in time and has no control over where he is going next. It also stars Ron Leibman as Paul Lazzaro and Valerie Perrine as Montana Wildhack. Slaughterhouse-Five premiered at the 25th Cannes Film Festival, where it won the Jury Prize and was nominated for the Palme d'Or. The film also won a Hugo Award for Best Dramatic Presentation and a Saturn Award for Best Science Fiction Film. Sacks was nominated for a Golden Globe Award for Most Promising Newcomer – Male for his portrayal of Pilgrim. Vonnegut (the original Author) wrote about the film soon after its release, in his preface to Between Time and Timbuktu: "I love George Roy Hill and Universal Pictures, who made a flawless translation of my novel Slaughterhouse-Five to the silver screen.