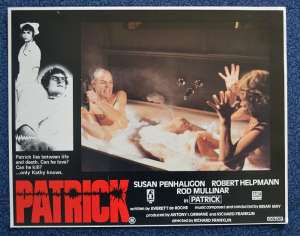 Original Australian Country Of Origin Lobby Card 11x14. Patrick is a 1978 Australian horror film directed by Richard Franklin and written by Everett De Roche.Starring Susan Penhaligon ,Robert Helpmann, Rod Mullinar  and Bruce Barry. The film is notable for popularising Ozploitation films in other territories. Filmmaker Quentin Tarantino is a fan and borrowed from Patrick for a scene in Kill Bill where the bride is in her coma and spits on the orderly, mimicking Patrick. The film was highly successful internationally, selling to over 30 countries and performing well in the US.