Parallax View, The Lobby Card No 2 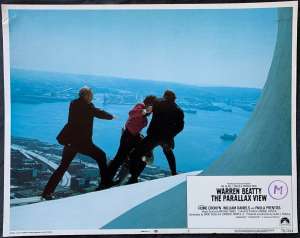 Lobby Card. The Parallax View is a 1974 American political thriller film produced and directed by Alan J. Pakula, and starring Warren Beatty, Hume Cronyn, William Daniels and Paula Prentiss. The screenplay by David Giler and Lorenzo Semple Jr. was based on the 1970 novel by Loren Singer. Robert Towne did an uncredited rewrite. The story concerns a reporter's investigation into a secretive organization, the Parallax Corporation, whose primary focus is political assassination.The Parallax View is the second instalment of Pakula's Political Paranoia trilogy, along with Klute (1971) and All the President's Men (1976). In addition to being the only film in the trilogy not to be distributed by Warner Bros. Pictures, The Parallax View is also the only one of the three not to be nominated for an Academy Award. It has received renewed praise in recent years.