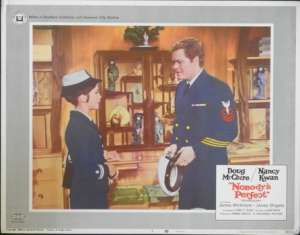 USA Lobby Card.Nobody's Perfect is a 1968 naval comedy film about the fictional USS Bustard and the antics of her crew in Japan. The crew has stolen a Buddha statue from a Japanese village, which if discovered missing would threaten Japanese/American relations. It is based on the novel The Crows of Edwina Hill, written by author of western novels and former Navy man Allan R. Bosworth. It starred Doug McClure and was directed by Alan Rafkin.