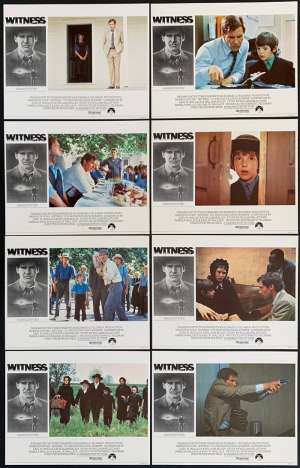 UK Lobby Card set 11x14.Witness is a 1985 American crime thriller film directed by Peter Weir and starring Harrison Ford, Kelly McGillis, Danny Glover, Lukas Haas and Viggo Mortensen. The screenplay by William Kelley, Pamela Wallace, and Earl W. Wallace focuses on a detective protecting a young Amish boy who becomes a target after he witnesses a murder in Philadelphia. The film was nominated for eight Academy Awards and won two, for Best Original Screenplay and Best Film Editing. It was also nominated for seven BAFTA Awards, winning one for Maurice Jarre's score, and was also nominated for six Golden Globe Awards. William Kelley and Earl W. Wallace won the Writers Guild of America Award for Best Original Screenplay and the 1986 Edgar Award for Best Motion Picture Screenplay presented by the Mystery Writers of America. Harrison Ford was nominated for the Academy Award for Best Actor. Originally the script ended with a scene of Book and Rachel each explaining their feelings for each other to the audience, but Weir felt the scene was unnecessary and decided not to shoot it. The studio executives were worried that the audience wouldn't understand the ending and tried to convince him otherwise, but Weir insisted that the character's emotions could be expressed with only visuals.