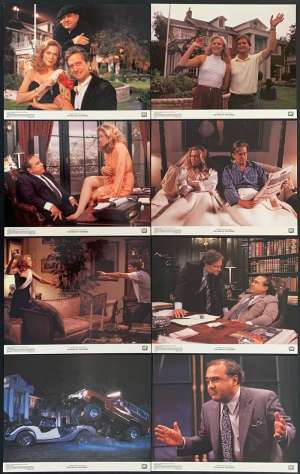 USA Lobby Stills Set 11"x14" Original.The War of the Roses is a 1989 American black comedy film based upon the 1981 novel of the same name by Warren Adler. The film follows a wealthy couple with a seemingly perfect marriage. When their marriage begins to fall apart, material possessions become the centre of an outrageous and bitter divorce battle. The film co-stars Michael Douglas, Kathleen Turner, and Danny DeVito. The three actors had previously worked together in Romancing the Stone and its sequel The Jewel of the Nile. DeVito directed the film, which also had producer James L. Brooks and actor Dan Castellaneta working on a project outside of The Simpsons. The opening title sequence was created by Saul Bass and Elaine Makatura Bass. In both the novel and the film, the married couple's family name is Rose, and the title is an allusion to the battles between the warring houses of York and Lancaster who were contending for the English throne during the late Middle Ages. In Germany, the film was such a huge success that its German title Der Rosenkrieg became synonymous with high-conflict divorce and is now regularly used in the media. Both commercially and critically it was a success.