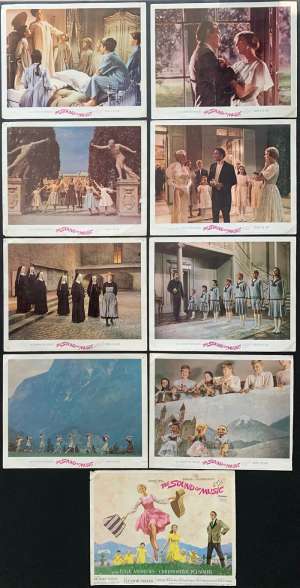 9 x Lobby Card Set TODD-AO for the very rare 11"x14" Roadshow release in 1965 for The Sound Of Music. This is the very rare "Roadshow" 9 Card 11”x 14” Lobby Card Set for this movie that was created in 1965. Included in the set is the Title Card that has the famous Howard Terpning artwork. This artwork would go on to be the basis for much of the films marketing in future releases. This rare set has "released in TODD-AO" in the top right of the title card (however on this set a snipe was placed over it saying ‘Cinemascope’ as the set was also used when this method of screening was adapted). An additional photo has been supplied where the TODD-AO can be seen in the light under the snipe. All the other cards are undated as per this very rare release. Future 8 card Lobby Sets were released in 1966 and for its general release in 1967. This 1965 release however is the ‘Holy Grail’ for collectors.