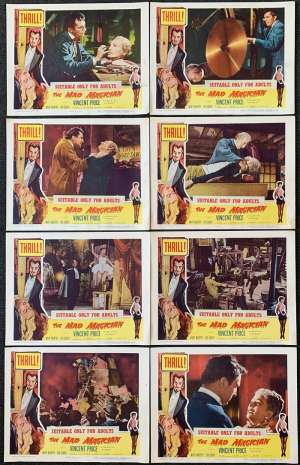 11"x 14" USA Lobby Card Set."The Mad Magician" of 1954 follows a plot that is similar to that of its successful predecessor. This is not to say, however, that this film isn't an original, delightfully macabre and absolutely wonderful gem itself. Price stars as Don Galico (aka. Galico the Great), an underrated master magician and inventor of magic devices, whose boss, a sleazy businessman, stole his wife (Eva Gabor) from him. When the boss takes away one of Galico's ingenious inventions and gives it to his rival, The Great Rinaldi (John Emery), Galico snaps, and a murderous spree of revenge begins.The Mad Magician was directed by John Brahm, Produced by Bryan Foy and written by Crane Wilbur.It was screened in 2 and 3D. This Lobby Card set rarely becomes available.