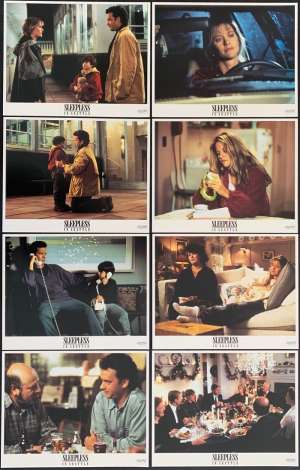 USA Lobby Card Set Original.Sleepless in Seattle is a 1993 American romantic comedy-drama film directed by Nora Ephron, from a screenplay she wrote with David S. Ward and Jeff Arch. Starring Tom Hanks and Meg Ryan, the film follows a journalist (Ryan) who, despite being newly engaged, becomes enamoured with a recently widowed architect (Hanks), when the latter's son calls in to a talk radio program requesting a new partner for his grieving father. In addition to Bill Pullman, Ross Malinger, and Rob Reiner, the film features an ensemble supporting cast. Inspired by the romance film An Affair to Remember (1957), Sleepless in Seattle was conceived as a romantic drama by Arch in 1989. Several studios rejected his script, deterred by the idea that its main couple does not meet for nearly the entire film. Several writers were hired to re-write the script into a funnier film, with Ephron eventually being promoted to director. Although both Hanks and Ryan had been favoured for the lead roles from the beginning, several other actors expressed interest in both parts, while Hanks often disagreed with Ephron over his character's material. The film was shot mostly in Seattle during the summer of 1992. Several of its most pivotal scenes were filmed on a former naval base due to the city's lack of sound stages, including a recreation of the Empire State Building's observation deck when the New York skyscraper was not available. Sleepless in Seattle was released on June 25, 1993, to positive reviews, receiving praise for Ephron's writing and direction, as well as Hanks and Ryan's performances.