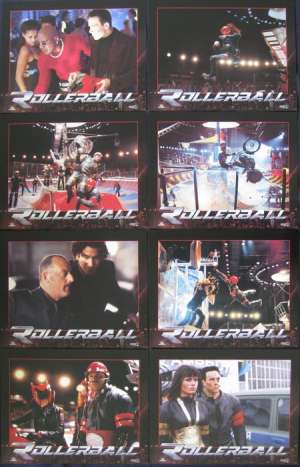 Rollerball is a 2002 remake of the 1975 science-fiction film of the same name. It stars Chris Klein (We Were Soldiers), Jean Reno (The Professional), LL Cool J (Any Given Sunday), Rebecca Romijn (X-Men Trilogy) and Naveen Andrews (Lost TV Series). It was directed by John McTiernan (Die Hard) and has a much greater focus on action, with more muted social and political overtones than the original. Unlike the previous film, it takes place in the present rather than in a future dystopian society. The film features cameo appearances by Pink, Slipknot, Carroll Shelby, and Shane McMahon. The movie was filmed in about 15 weeks, between July 24 and November 2000. McTiernan's first cut, which was over two hours long, was an unapologetic hard-R rated film with lots of nudity and brutal violence in Rollerball scenes. The studio knew it would be difficult to market and had him re-shoot and edit scenes to bring it down to a PG rating.Thus the delay in its release till 2002.