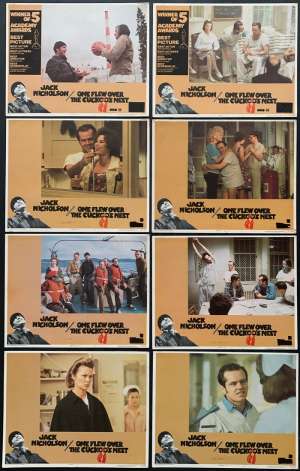 USA 11"x14" Lobby Card Set. Note cards 1 and 8 are both from the post Oscar winning release. All other cards are the first release pre Oscar ones. The cast image art was exactly the same for both releases. One Flew Over the Cuckoo's Nest is a 1975 American comedy-drama film directed by Miloš Forman and produced by Michael Douglas and Saul Zaentz. The film stars Jack Nicholson, and features a supporting cast of Louise Fletcher, Danny De Vito, Christopher Lloyd, and William Redfield. Considered to be one of the greatest films ever made, One Flew Over the Cuckoo's Nest is No. 33 on the American Film Institute's 100 Years... 100 Movies list. The film was the second to win all five major Academy Awards (Best Picture, Actor in Lead Role, Actress in Lead Role, Director, and Screenplay) following It Happened One Night in 1934, an accomplishment not repeated until 1991 by The Silence of the Lambs. It also won numerous Golden Globe and BAFTA Awards.