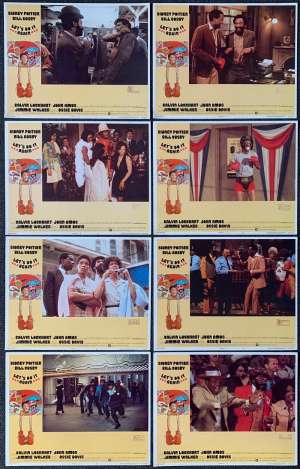 USA Lobby Card Set.Let's Do It Again is a 1975 American action crime comedy film directed by and starring Sidney Poitier and co-starring Bill Cosby and Jimmie Walker among an all-star black cast. The film, directed by Poitier is about blue-collar workers who decide to rig a boxing match to raise money for their fraternal lodge. The song of the same name by The Staple Singers was featured as the opening and ending theme of the movie, and as a result, the two have become commonly associated with each other. The production companies include Verdon Productions and The First Artists Production Company, Ltd., and distributed by Warner Bros. The movie was filmed in two cities, Atlanta, Georgia and New Orleans, Louisiana, where most of the plot takes place. This was the second film pairing of Poitier and Cosby following Uptown Saturday Night, and followed by A Piece of the Action (1977). Of the three, Let's Do It Again has been the most successful both critically and commercially. Calvin Lockhart and Lee Chamberlin also appeared in Uptown Saturday Night.