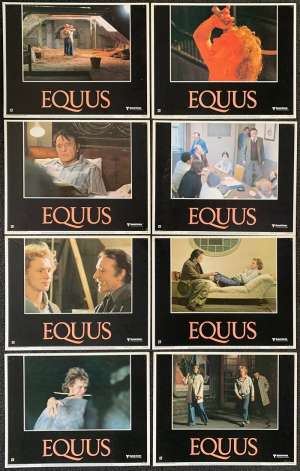 USA Lobby Card Set.Equus is a 1977 psychological drama film directed by Sidney Lumet and written by Peter Shaffer, based on his play of the same name. The film stars Richard Burton, Jenny Agutter, Peter Firth, Colin Blakely, Joan Plowright, Eileen Atkins. The story concerns a psychiatrist treating a teenager who has blinded horses in a stable, attempting to find the root of his horse worship. Lumet's translation of the acclaimed play to a cinematic version incorporated some realism, in the use of real horses as opposed to human actors, and a graphic portrayal of the blinding. The film received positive reviews, with awards for Burton, Firth and Agutter.