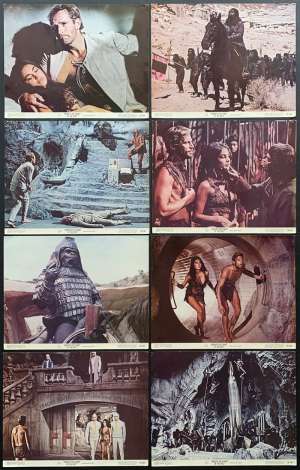 Very rare USA Lobby Card Set 11"x14".Beneath the Planet of the Apes is a 1970 American science fiction film directed by Ted Post and written by Paul Dehn. It is the second of five films in the original Planet of the Apes series produced by Arthur P. Jacobs. The film stars James Franciscus, Kim Hunter, Maurice Evans, and Linda Harrison, and features Charlton Heston in a supporting role. Another spacecraft crashes on the planet ruled by apes, carrying astronaut Brent who searches for Taylor and discovers an underground city inhabited by mutated humans with advanced telekinetic abilities. Beneath the Planet of the Apes was a success at the box office.