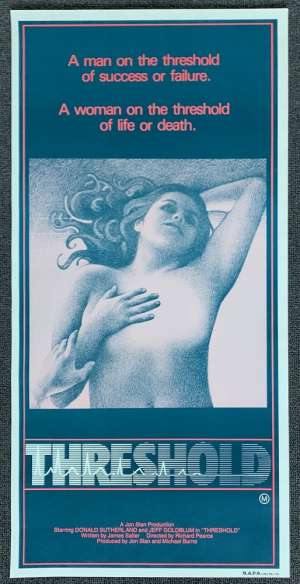 Daybill Poster.Threshold is a 1981 Canadian drama/science fiction film directed by Richard Pearce and starring Donald Sutherland, Jeff Goldblum and Mare Winningham. The storyline is as follows: Respected cardiac surgeon Dr. Thomas Vrain performs a risky operation to provide a patient with the first artificial heart ever implanted in a human subject. He and his colleague, research scientist Dr. Aldo Gehring, consider the risks and weigh the odds as time runs out for Carol Severance, the patient. Severance will die unless the experimental surgery is done quickly and succeeds. The film was nominated for eight Genie Awards in 1983 and won three of them. Sutherland also won best actor at the 1982 Karlovy Vary International Film Festival for his performance. Threshold was filmed on location at the then newly constructed Ottawa General Hospital.