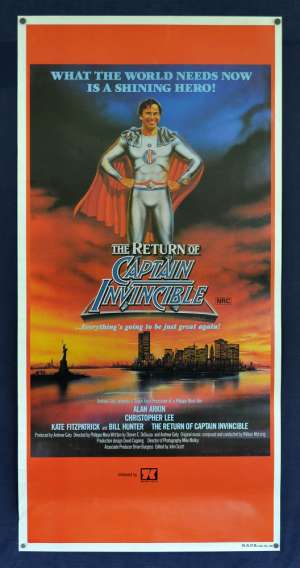 Country Of Origin Poster - artwork by C.W. Taylor. The Return of Captain Invincible is a 1983 Australian musical comedy superhero film starring Alan Arkin, Michael Pate, Bill Hunter, Kate Fitzpatrick and Christopher Lee. The Return of Captain Invincible was directed by Australian director Philippe Mora and was filmed in Australia. It was produced by Seven Keys Production and Willara and distributed by Seven Keys in Australia. It was nominated at the AFI’s for Best Production Design. The plot involves the Captain America/Superman inspired super-hero called "Captain Invincible who is active during Prohibition, World War II, and afterwards. Once a popular hero to all Americans, he is forced into retirement by McCarthy-style government persecution in the 1950s. Thirty years later, his old rival, the super-villain "Mr. Midnight", re-emerges and steals a secret government super-weapon: the hypno-ray. The US government asks Captain Invincible to return, and the story follows his attempts to return to super-heroing and redeem his reputation.