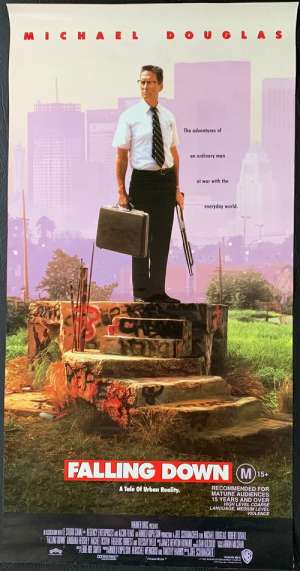 Rare Rolled Daybill Poster.Falling Down is a 1993 thriller film directed by Joel Schumacher and written by Ebbe Roe Smith. The film stars Michael Douglas in the lead role of William Foster, a divorced and unemployed former defence engineer. The film centres on Foster as he treks on foot across the city of Los Angeles, trying to reach the house of his estranged ex-wife in time for his daughter's birthday party. Along the way, a series of encounters, both trivial and provocative, cause him to react with increasing violence and make sardonic observations on life, poverty, the economy, and commercialism. Robert Duvall co-stars as Martin Prendergast, an aging Los Angeles Police Department Sergeant on the day of his retirement, who faces his own frustrations, even as he tracks down Foster. The film grossed $40.9 million against a $25 million budget and reviews were generally positive.