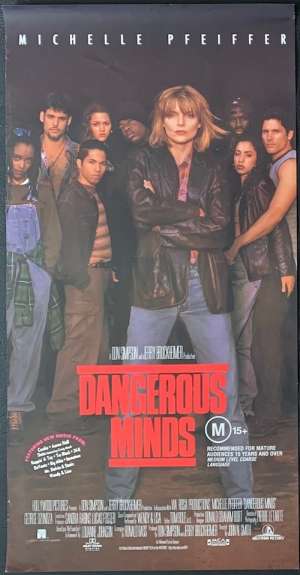 Rare Rolled Daybill Poster.Dangerous Minds is a 1995 American drama film directed by John N. Smith and produced by Don Simpson and Jerry Bruckheimer. It is the final film produced by Simpson to be released in his lifetime.  It is based on the autobiography ‘My Posse Don't Do Homework’ by retired U.S. Marine LouAnne Johnson, who in 1989 took up a teaching position at Carlmont High School in Belmont, California. There most of her students were African American and Latino teenagers from East Palo Alto, a poverty-stricken, racially segregated, and economically deprived city. Starring Michelle Pfeiffer as Johnson, the film became a surprise box office success in the summer of 1995. The soundtrack and its lead single "Gangsta's Paradise" enjoyed major success, and received nominations for the Grammy Award for Record of the Year.