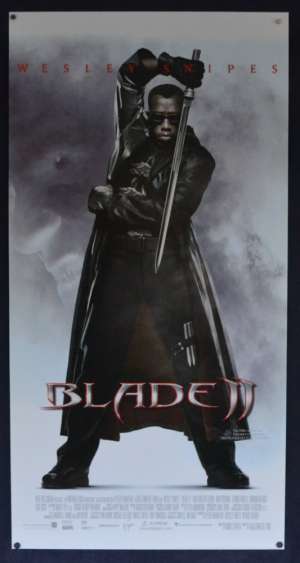 Blade II (also known as Blade II: Bloodhunter), is a 2002 American superhero film based on the fictional character of the same name from Marvel Comics. It is the sequel of the first film and the second part of the Blade film series, followed by Blade: Trinity. It was written by David S. Goyer, who also wrote the previous film, directed by Guillermo del Toro, and had Wesley Snipes returning as the lead character and producer. The film follows the human-vampire hybrid Blade in his continuing effort to protect humans from vampires, finding himself in a fierce battle against a group of extremely savage, powerful mutant vampires who seek to commit global genocide of both vampire and human races. Blade II was released on March 22, 2002 and was a box office success, grossing over $155 million. It received positive reviews from critics, earning praise for its performances, atmosphere, direction, and action sequences.