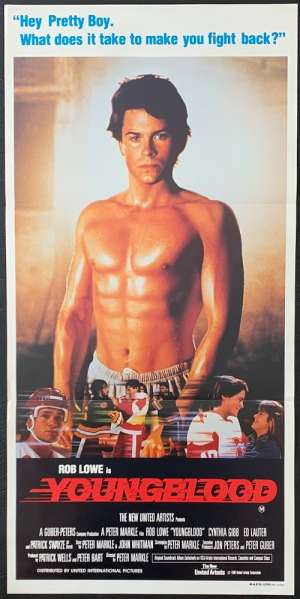 Daybill Poster.Youngblood is a 1986 American drama sports film directed, co-produced, and co-written by Peter Markle, and starring Rob Lowe (Breakfast Club), Patrick Swayze (Dirty Dancing),Keanu Reeves (John Wick) and Cynthia Gibb (Gypsy). The filming of Youngblood took place in the east end of Toronto in the summer of 1984. Several of the cast and crew had actual hockey experience and skills, though star Rob Lowe had to learn to skate, and both he and Patrick Swayze, a better skater, used doubles for many of their on-ice skating scenes. Keanu Reeves played goalie growing up and in high school. Youngblood has a cult following and became a popular VHS video rental and cable TV showing.