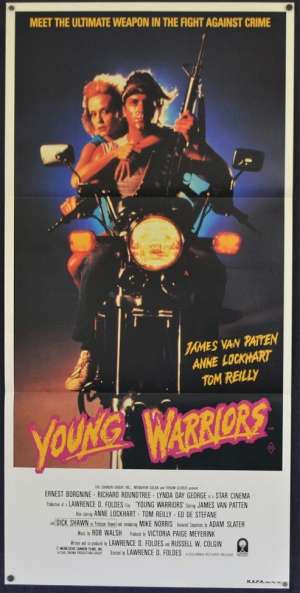 Daybill Poster.‘Young Warriors’ as it was released in the UK and Australia (‘The Graduates of Malibu High’ in the USA) is a low budget American action film starring James Van Patten, Ernest Borgnine, Richard Roundtree and Lynda Day George. It was released theatrically by Cannon Films on August 26, 1983. The storyline went as follows: A young woman (April Dawn) is gang raped and murdered in a California college town, sparking her brother Kevin (James Van Patten) to take up arms by night with a gang of like-minded vigilantes from his fraternity, brutally punishing any miscreants they catch in a criminal act. As Kevin and his gang head toward a final, bloody confrontation with those that killed his sister, other scenes show the difference between his character, now violent, and the people he is supposedly protecting.