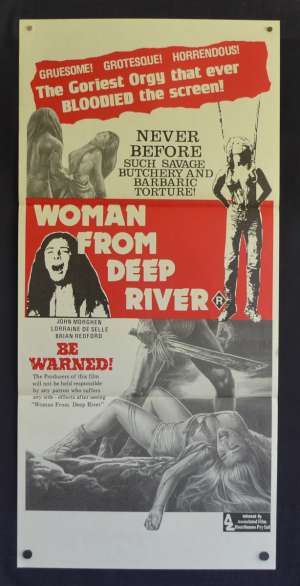 Daybill Poster.Known as Woman from Deep River in Australia, this film also goes by Cannibal Ferox and Make Them Die Slowly in the US. It is a 1981 Italian cannibal exploitation horror film written and directed by Umberto Lenzi. The storyline is simple but effective. Three friends out to disprove cannibalism meet two men on the run who tortured and enslaved a cannibal tribe to find emeralds, and now the tribe is out for revenge. Upon its release, the film's US distributor claimed it was "the most violent film ever made". Woman from Deep River was also claimed to be "banned in 31 countries", although this claim is dubious. In Australia, where it was released as Woman from Deep River, the film also faced censorship issues, being given numerous censored releases. In 2005, the uncut version was released on DVD by Siren Visual under the Cannibal Ferox title. The film has a huge cult following amongst the Horror genre.