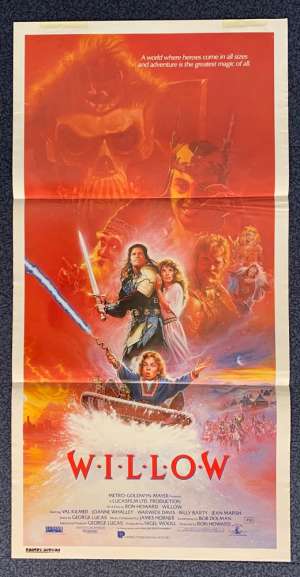 Bryan Bysouth Daybill Poster Art. Willow is a 1988 American-British fantasy film directed by Ron Howard, produced and with a story by George Lucas, and starring Warwick Davis, Val Kilmer, Joanne Whalley, Jean Marsh, and Billy Barty. Davis plays the eponymous lead character and hero: a reluctant farmer who plays a critical role in protecting a special baby from a tyrannical queen who vows to destroy her and take over the world in a sword and sorcery setting.Lucas conceived the idea for the film in 1972, approaching Howard to direct during the post-production phase of Cocoon in 1985. Bob Dolman was brought in to write the screenplay, coming up with seven drafts before finishing in late 1986. It was then set up at Metro-Goldwyn-Mayer and principal photography began in April 1987, finishing the following October.The majority of filming took place at Elstree Studios in Hertfordshire, England, as well as Wales and New Zealand. Industrial Light & Magic created the visual effects sequences, which led to a revolutionary breakthrough with digital morphing technology. The film was released in 1988 and was a modest financial success. It received two Academy Award nominations and has developed a cult following amongst fantasy fans.