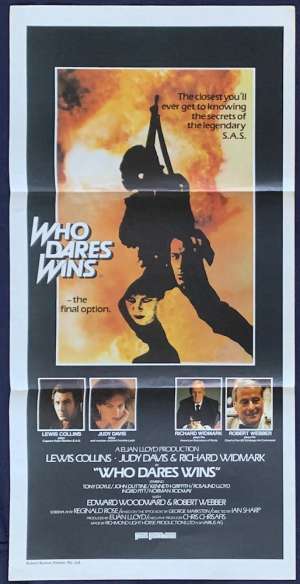 Daybill Poster.Who Dares Wins (The Final Option as per USA release) is a 1982 British political thriller film directed by Ian Sharp and starring Lewis Collins (The Professionals TV Series), Judy Davis (My Brilliant Career), Richard Widmark and Edward Woodward (Breaker Morant). Judy Davis was cast on the strength of her performance in My Brilliant Career. The title is the motto of the elite Special Air Service (SAS).The plot is largely inspired by the Iranian Embassy siege of 1980, where the United Kingdom's SAS dramatically stormed the building to rescue those being held hostage inside. Euan Lloyd (The Wild Geese), the film's producer, got the idea for the film after watching live television coverage of the event. The film was made with the help of the 22 SAS Regiment. It was released in the US as The Final Option. The action sequences were arranged by veteran James Bond stuntman Bob Simmons. When it came time to shoot the SAS assault on the US embassy, the SAS offered to do the scene which was taken up. The film was the sixth-highest grosser at the UK box office in 1982. Lewis Collins went on to audition for James Bond (replacing Roger Moore) and was a hot favourite at the time.