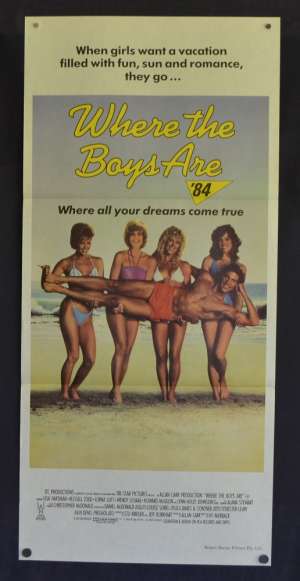 Original Australian Daybill Movie Poster Where The Boys Are 84

Where the Boys Are '84 (onscreen title: Where the Boys Are) is a 1984 American sex comedy film and a remake of the 1960 film Where the Boys Are, starring Lisa Hartman, Lorna Luft, Wendy Schaal and Lynn-Holly Johnson. Directed by Hy Averback and produced by Allan Carr, it was the first film released by Tri-Star Pictures. The film's tagline is: When girls want a vacation filled with fun, sun and romance, they go to Fort Lauderdale ... Where all your dreams come true. Although touted as a more "realistic" version of the popular 1960 film, with nudity and drug references, the date rape storyline of the original does not appear in this version. Where the Boys Are '84 was filmed from May 16, 1983 to June 26, 1983 at the following Florida locations: Royal Palm Yacht and Country Club in Boca Raton; Lauderdale Beach Hotel and City Limits Nightclub in Fort Lauderdale; Young Circle Bandshell in Hollywood. Upon its release it ranked #5 at the US box office.