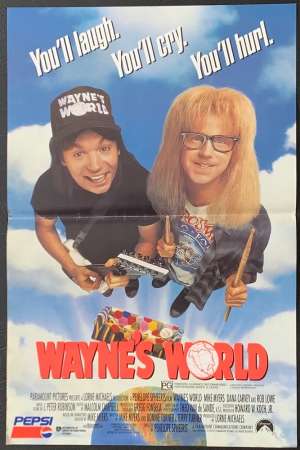 Mini Daybill Poster.Wayne's World is a 1992 American comedy film directed by Penelope Spheeris. It was produced by Lorne Michaels and written by Mike Myers and Bonnie and Terry Turner. Based on the Saturday Night Live sketch Wayne's World, it stars Myers in his feature film debut as Wayne Campbell and Dana Carvey as Garth Algar, a pair of rock music fans who broadcast a public-access television show. It also features Tia Carrere, Rob Lowe, Lara Flynn Boyle, Brian Doyle-Murray, Chris Farley, Ed O'Neill, Ione Skye, Meat Loaf and Alice Cooper in supporting roles. Filled with pop culture references, the sketches and the film started catchphrases such as "Schwing!" and "Schyea", as well as popularizing "That's what she said", "Party on!", and the use of "... Not!" after apparently affirmative sentences to state the contrary.Wayne's World was released in the United States on February 14, 1992, by Paramount Pictures. A critical and commercial success, it was the tenth highest-grossing film of 1992 and remains the highest-grossing film based on a Saturday Night Live sketch.