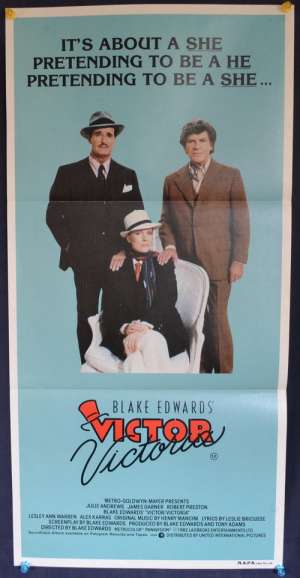 Blake Edwards' Victor/Victoria, the 1982 Blake Edwards U.S./English musical sexual identity comedy ("The disguise surprise comedy of the year!"; "It's about a she pretending to be a he pretending to be a she..."; "The whole of Paris was talking about her. They only knew half the story."; "A disguise surprise comedy"; about a woman impersonating a female impersonator!) starring Julie Andrews (in her nominated for Best Actress Academy Award title role), James Garner, Robert Preston (in his nominated for Best Supporting Actor Academy Award role), Lesley Ann Warren (in her nominated for Best Supporting Actress Academy Award role), and Alex Karras.