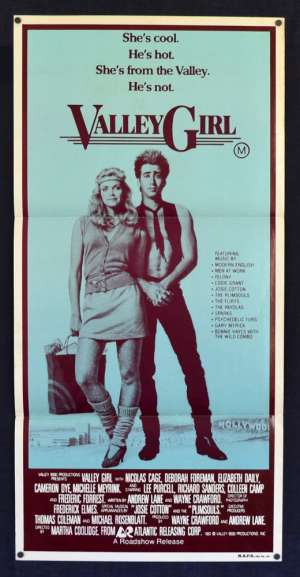 Valley Girl is a 1983 American romantic comedy film directed by Martha Coolidge, and stars Nicolas Cage, Deborah Foreman, Michelle Meyrink, Elizabeth Daily, Cameron Dye and Michael Bowen. The plot is loosely based on Shakespeare's Romeo and Juliet. The film garnered mostly positive reviews but what the film also is known for is its music. The song "I Melt with You" occurred twice in the movie, in the ending credits and in the love scene montage. The director, Martha Coolidge, heard it on the radio and decided it caught the spirit of the movie. She had to call up the station and sing it to them to find out what it was called, because they didn't announce what songs were after they were played. A remake of the film is set for release in mid - 2018.