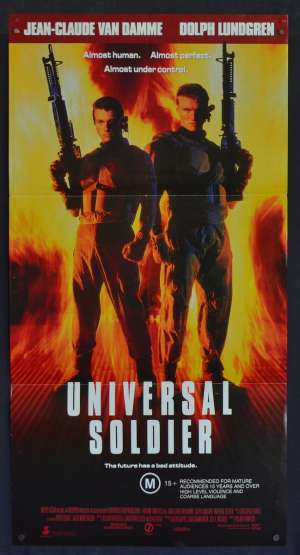 Universal Soldier is a 1992 American military science fiction action film directed by Roland Emmerich, produced by Mario Kassar and Allen Shapiro, and written by Richard Rothstein and Dean Devlin. Stars Jean-Claude Van Damme and Dolph Lundgren.The film tells the story of Luc Deveraux, a former US Army soldier who was killed in Vietnam War in 1969, and returned to life following a secret military project called the "Universal Soldier" program. However, he finds out about his past even although his memory was erased, and escapes alongside a young TV journalist. Along the way, they have to deal with the return of his arch enemy, Sgt. Andrew Scott, who had lost his sanity in the Vietnam War, and became a psychotic megalomaniac, intent on killing him and leading the Universal Soldiers. Universal Soldier was released by TriStar Pictures on July 10, 1992. The film grossed $36 million worldwide against its budget of $23 million.