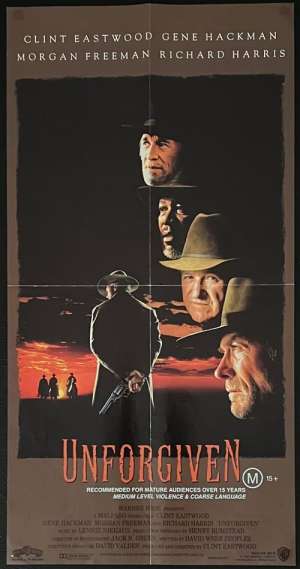 Rare Rolled Daybill Poster.Unforgiven is a 1992 American revisionist Western film produced and directed by Clint Eastwood and written by David Peoples (Blade Runner). The film portrays William Munny, an aging outlaw and killer who takes on one more job, years after he had turned to farming. The film stars Eastwood in the lead role, with Gene Hackman, Morgan Freeman and Richard Harris. Eastwood stated that the film would be his last Western for fear of repeating himself or imitating someone else's work. The concept for the film dated to 1976, when it was developed under the titles The Cut-Whore Killings and The William Munny Killings. By Eastwood's own recollection he was given the script in the "early 80s" although he did not immediately pursue it, because, according to him, "I thought I should do some other things first". Unforgiven grossed over $159 million on a budget of $14.4 million and received widespread critical acclaim, with praise for the acting (particularly from Eastwood and Hackman), directing, editing, themes and cinematography. The film won four Academy Awards: Best Picture and Best Director for Clint Eastwood, Best Supporting Actor for Gene Hackman, and Best Film Editing for editor Joel Cox. Eastwood dedicated the film to directors and mentors Sergio Leone and Don Siegel.