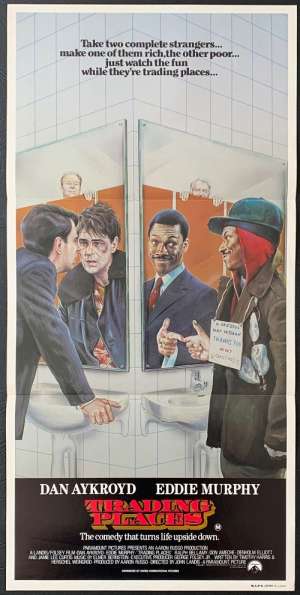 Trading Places Daybill Poster with Adrian Purkis artwork-considered the best amongst collectors.Trading Places is a 1983 American comedy film directed by John Landis and starring Dan Aykroyd and Eddie Murphy. It tells the story of an upper-class commodities broker and a homeless street hustler whose lives cross paths when they are unknowingly made part of an elaborate bet. Ralph Bellamy, Don Ameche, Denholm Elliott, and Jamie Lee Curtis also star. The storyline is often called a modern take on Mark Twain's classic 19th-century novel The Prince and the Pauper. The film was written by Timothy Harris and Herschel Weingrod and was produced by Aaron Russo. The film was originally called Black and White. The script had been developed for Richard Pryor and Gene Wilder but then Pryor was involved in a severe accident. Paramount suggested Eddie Murphy as a replacement (48 Hours had been filmed but not released). Landis liked him and pushed for Dan Aykroyd as a co-star. Landis cast Jamie Lee Curtis over the objections of studio executives who thought she was just a horror star. She was paid $70,000 and says Landis "single-handedly changed the course of my life by giving me that part”. It was released to theatres in North America on July 8, 1983, where it was distributed by Paramount Pictures. The film earned over $90 million during its theatrical run in the United States, finishing as the fourth highest earning film of the year and the second highest earning R-rated film of 1983. Denholm Elliott and Jamie Lee Curtis won the awards for Best Actor in a Supporting Role and Best Actress in a Supporting Role, respectively, at the 37th British Academy Film Awards. Trading Places also met with positive reviews from critics.