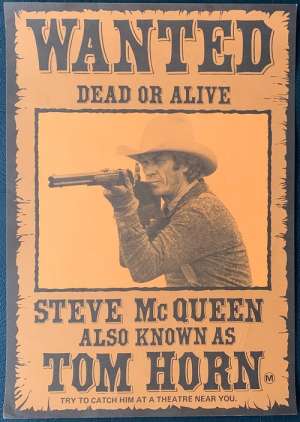 Tom Horn is a 1980 Western film directed by William Wiard and starring Steve McQueen as the legendary lawman, outlaw, and gunfighter Tom Horn. It was based on Horn's own writings. The film had been meant to go into production in 1978 but faced stiff competition, with United Artists also planning a film about Horn as a vehicle for Robert Redford. The latter dropped out and the film, about Horn's younger years, was eventually made by CBS as a four-hour TV movie named Mr. Horn with David Carradine starring. McQueen ordered several rewrites to the film script, while original director Don Siegel left to be replaced eventually by William Wiard. McQueen wanted to direct himself but was not able to due to various rules of film making. Tom Horn was the first and only McQueen vehicle to receive an R rating. It was during production that McQueen had trouble breathing and was later determined to have a rare form of lung cancer called malignant mesothelioma which caused his death 12 months later.