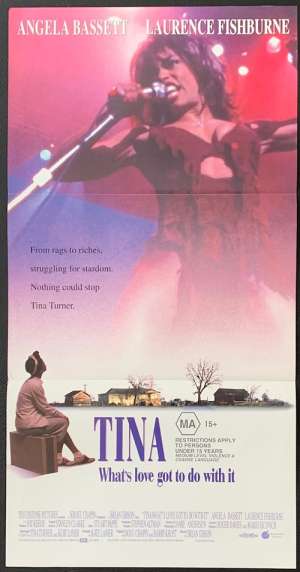 Daybill Poster.Tina - What's Love Got To Do With It is a 1993 American biographical film directed by Brian Gibson, loosely based on the life of Tina Turner. It stars Angela Bassett as Tina Turner,Laurence Fishburne as Ike Turner and James Reyne as Roger Davies. Halle Berry, Robin Givens, Pam Grier, Whitney Houston, Janet Jackson, and Vanessa L. Williams and were all considered for the role of Tina Turner. Whitney Houston was actually offered the role, but had to decline due to imminent maternity. The screenplay was adapted by Kate Lanier from the book 'I, Tina' written by Tina Turner and Kurt Loder. Both Ike and Tina Turner assigned rights to Lanier for their lives to be dramatized in the film. In the United States, the film grossed almost $40 million and around $20 million in rentals. In the United Kingdom, it grossed nearly £10 million. The film won a Golden Globe award and was nominated for two Academy Awards.