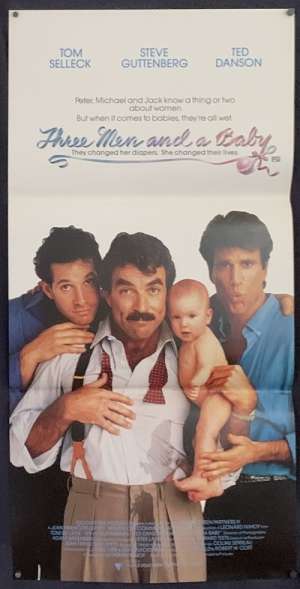 Daybill Poster.Three Men and a Baby is a 1987 American comedy film starring Tom Selleck, Steve Guttenberg, and Ted Danson. It follows the mishaps and adventures of three bachelors as they attempt to adapt their lives to de facto fatherhood with the arrival of the love child of one of the gentlemen. The script was based on the 1985 French film Trois hommes et un couffin (Three Men and a Cradle). The film was the biggest American box office hit of that year, surpassing Fatal Attraction and eventually grossing $167 million in the United States and Canada and $240 million worldwide. The film won the 1988 People's Choice Award for Favourite Comedy Motion Picture. Mary was played by twins Lisa and Michelle Blair.The soundtrack included the Peter Cetera song "Daddy's Girl", which was used for the movie's big music montage sequence, the Miami Sound Machine song "Bad Boy," which opened it, and the John Parr song "The Minute I Saw You", which ended the film.