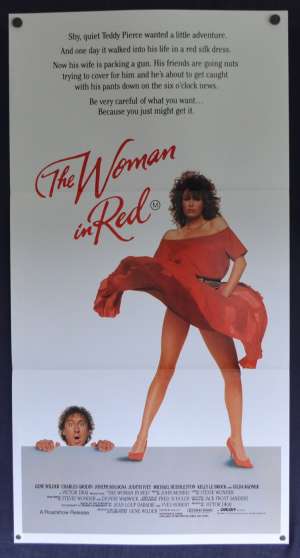 Daybill Poster.The Woman in Red is a 1984 American romantic comedy film directed by and starring Gene Wilder who also wrote the script. The film is a remake of ‘An Elephant Can Be Extremely Deceptive’, also known as ‘Pardon Mon Affaire’, directed by Yves Robert, and written by Jean-Loup Dabadie and Yves Robert. It co-stars Charles Grodin, Gilda Radner, Joseph Bologna, Judith Ivey and Kelly LeBrock. The film won an Academy Award for Best Original Song for "I Just Called to Say I Love You", performed by Stevie Wonder. The album reached #4 on the US Billboard 200 chart, #1 on the R&B Albums chart (for four weeks) and #2 on the UK Albums Chart.It reached #1 on the Italian, Spanish and Swedish Album Chart. The film gained publicity for Kelly LeBrock, a real-life model making her screen debut, particularly for the skirt-and-grate scene, a variation of Marilyn Monroe's iconic pose in The Seven Year Itch.