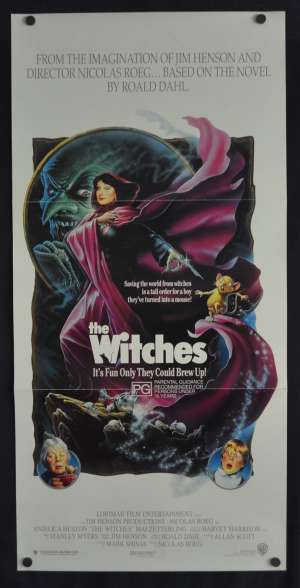 Daybill Poster art by Winters. The Witches is a 1990 British/American dark fantasy horror film based on the children's novel of the same title by Roald Dahl. It was directed by Nicolas Roeg and produced by The Jim Henson Company for Lorimar Film Entertainment and Warner Bros. Starring Anjelica Huston, Mai Zetterling, Rowan Atkinson, and Jasen Fisher, it is the last theatrical film to be produced by Lorimar before the company shut down 3 years later in 1993. The film was very well received by critics eg. The film holds a rare 100% in the film critics site Rotten Tomatoes, based on reviews from 32 critics.