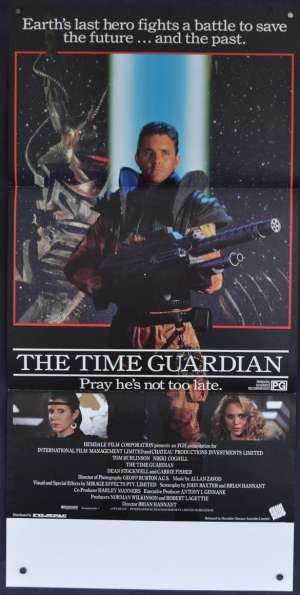 Daybill Poster - Country of Origin.The Time Guardian is a 1987 Australian science fiction film co-written by John Baxter and Brian Hannant, directed by Hannant, and starring Tom Burlinson, Nikki Coghill, Dean Stockwell, and Carrie Fisher. The storyline of the film was as follows: In the year 4039, a city of survivors from the Neutron Wars travels through time and space escaping the Jen-Diki, a race of cyborgs intent on wiping out humanity. Two soldiers from the city, Ballard and Petra, are transported to the South Australian outback in 1988 to prepare a landing site for the city. Petra is wounded and Ballard seeks help from geologist Annie Lassite. Ballard is dismayed when Annie's ancient cave paintings depict Ballard's city. After a police officer, MacCarthy, activated Ballard's tracking device despite his protests, an advance party of Jen-Diki arrive in Australia ensuring a conflict. Filming took place in South Australia at the soundstages of the South Australian Film Corporation in Henson and at a deserted quarry outside Adelaide. Mirage Effects did the special effects.This film had a limited distribution and the poster is rarely seen.