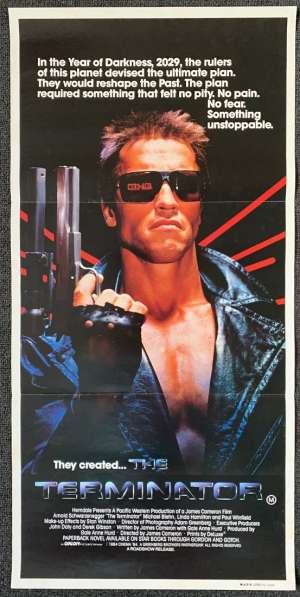 Daybill Poster.The Terminator is a 1984 American science fiction action film directed by James Cameron. It stars Arnold Schwarzenegger as the Terminator, a cyborg assassin sent back in time from 2029 to 1984 to kill Sarah Connor (Linda Hamilton), whose son will one day become a savior against machines in a post-apocalyptic future. Michael Biehn plays Kyle Reese, a soldier from the future sent back in time to protect Connor. The screenplay is credited to Cameron and producer Gale Anne Hurd, while co-writer William Wisher Jr. received a credit for additional dialogue. Executive producers John Daly and Derek Gibson of Hemdale Film Corporation were instrumental in the film's financing and production. Sylvester Stallone and Mel Gibson were offered the Terminator role, but both turned it down. The studio suggested O. J. Simpson for the role, but Cameron didn't feel Simpson would be believable as a killer. After meeting with Schwarzenegger Cameron knew he had found his Terminator. The Terminator topped the USA box office for two weeks and helped launch Cameron's film career and solidify Schwarzenegger's. It received critical acclaim, with many praising its pacing, action scenes and Schwarzenegger's performance.