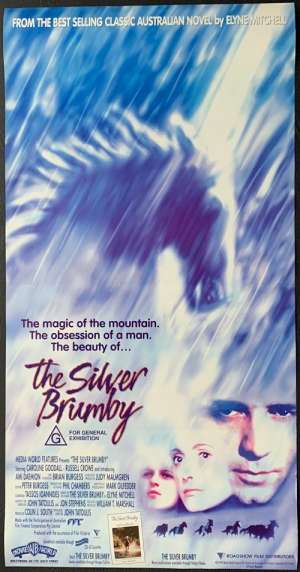 Daybill Poster.The Silver Brumby (also known as The Silver Stallion or The Silver Stallion: King of the Wild Brumbies in overseas markets such as the United States) is a 1993 Australian drama-family film, directed by John Tatoulis, and starring actors Russell Crowe, Caroline Goodall and Amiel Daemion. It was based on the Silver Brumby series of novels by Elyne Mitchell. Director John Tatoulis says he was attracted to the project because of the spirituality of the Silver Brumby books. The film was shot in the high country of Victoria around Dinner Plain, Mount Hotham, Swindler's Creek and the Blue Ribbon ski area. A hut now known as the Silver Brumby Hut was built as a set prop at Mount Hotham and is now a tourist attraction.