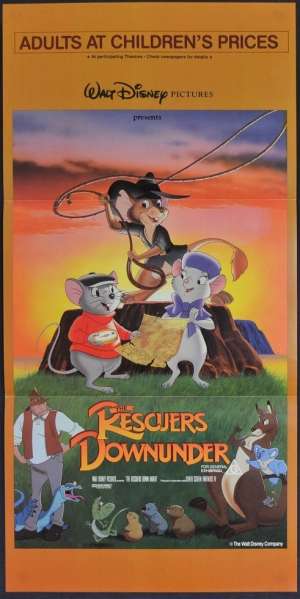 Original Australian Daybill Movie Poster The Rescuers Down Under

The Rescuers Down Under is a 1990 American animated comedy-drama adventure film produced by Walt Disney Feature Animation and released by Walt Disney Pictures on November 16, 1990. The 29th Disney animated feature film, the film is the sequel to the 1977 animated film The Rescuers, which was based on the novels of Margery Sharp. Set in the Australian Outback, the film centres on Bernard and Bianca traveling to Australia to save a boy named Cody from a villainous poacher in pursuit of an endangered bird of prey. Featuring the voices of Bob Newhart, Eva Gabor (in her final film role), John Candy, and George C. Scott. The film was the second released during the Disney Renaissance (1989–1999) era, which had begun the year prior with The Little Mermaid. It is the first film to be completely created digitally and not use a camera.